Notes in perfumery are descriptors of scents that can be sensed upon the application of a perfume. These notes are created carefully with knowledge of the evaporation process and intended use of the perfume. The presence of one note may alter the perception of another—for instance, the presence of certain base or heart notes will alter the scent perceived when the top notes are strongest, and likewise the scent of base notes in the dry-down will often be altered depending on the smells of the heart notes.

The idea of notes is used primarily for the marketing of fine fragrances. The term is sometimes used by perfumers to describe approximately scents or the perfumery process to laypeople.

Notes are separated into three classes; top/head notes, middle/heart notes, and base notes; which denote groups of scents which can be sensed with respect to the time after the application of a perfume

Fragrant materials are listed by Poucher in order of volatility and are grouped under respective evaporation coefficients (perfume notes) that range from 1 to 100.

Perceived immediately upon application of a perfume, top notes consist of small, light molecules that evaporate quickly. They form a person's initial impression of a perfume and thus are very important in the selling of the product. The scents of this note class are usually described as ``fresh``, ``assertive`` or ``sharp``. The compounds that contribute to top notes are strong in scent, very volatile, and evaporate quickly.

Although not as saliently perceived, the heart and base-notes contribute much to the scent in the top notes.

They are also called the ``heart notes``.

The scent of a perfume that emerges just before the top notes dissipate. The middle note compounds form the ``heart`` or main body of a perfume and emerge in the middle of the perfume's dispersion process. They serve to mask the often unpleasant initial impression of base notes, which become more pleasant with time. Not surprisingly, the scent of middle note compounds is usually more mellow and ``rounded``. Scents from this note class disappear anywhere from twenty minutes to one hour after the application of a perfume.

The scent of a perfume that appears close to the departure of the middle notes. The base and middle notes together are the main theme of a perfume. Base notes bring depth and solidity to a perfume. Compounds of this class are often the fixatives used to hold and boost the strength of the lighter top and middle notes. Consisting of large, heavy molecules that evaporate slowly, compounds of this class of scents are typically rich and ``deep`` and are usually not perceived until 30 minutes after the application of the perfume or during the period of perfume dry-down.

Some base notes can still be detectable in excess of twenty-four hours after application, particularly the animalic and musk notes. 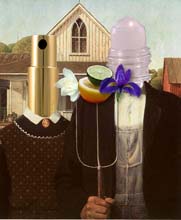 The traditional classification which emerged around 1900 comprised the following categories:

Since 1945, due to great advances in the technology of perfume creation such as compound design and synthesis as well as the natural development of styles and tastes; new categories have emerged to describe modern scents:

The Fragrance wheel is a relatively new classification method that is widely used in retail and in the fragrance industry. The method was created in 1983 by Michael Edwards, a consultant in the perfume industry, who designed his own scheme of fragrance classification after being inspired by a fragrance seminar by Firmenich. The new scheme was created in order to simplify fragrance classification and naming, as well as to show the relationships between each individual classes. The five standard families consist of Floral, Oriental, Woody, Fougère, and Fresh, with the former four families being more “classic” while the latter consists of newer, bright and clean smelling citrus and oceanic fragrances that have arrived due to improvements in fragrance technology. With the exception of the Fougère family, each of the families are in turn divided into three sub-groups and arranged around a wheel:

The Fougère family is placed at the center of this wheel since they are large family of scents that usually contain fragrance elements from each of the other four families.  As a class, Chypres is more difficult to place since they would located under parts of the Oriental and Woody families. For instance, Guerlain Mitsouko, which is classically identified as a chypre will be placed under Mossy Woods, but Hermès Rouge, a chypre with more floral character, would be placed under Floral Oriental.

According to Osmoz, there are eight major families: Chypre, Citrus, Floral and Oriental (feminine), and Aromatic, Citrus, Oriental and Woody (masculine). Each one of those olfactive families is then split into several subfamilies.

Chypre – Based on a woody, mossy, floral accord, which can include leathery or fruity notes as well. Chypre perfumes have a rich and lingering scent. Chypre by Coty enjoyed such success in 1917 that “chypre” is now a generic name for a whole category of classic perfumes. The compositions are based on oakmoss, ciste-labdanun, patchouli and bergamot accords. The richness of chypre notes mixes wonderfully with fruity or floral notes. This family is made up of distinguished, instantly recognizable fragrances.

Subgroups under this family are Floral and Fruity:

Floral – floral notes such as lily of the valley, rose or jasmine are added to the chypre structure. Examples include: Badgley Mischka, Clinique Aromatics Elixir, Givenchy Amariage Mariage and Donna Karan DKNY Be Delicious

Fruity – The chypre accord is enriched and embellished with fruity notes such as peach, mirabelle plum and exotic fruit. Examples include: Guerlain Mitsouko, and Dior Miss Dior Cherie.

Citrus – Each perfume in this family is primarily composed of citrus scents such as bergamot, lemon, orange, tangerine and grapefruit, to which other orange-tree elements (orange blossoms, petit grain or neroli oil) have been added. Floral or even chypre accords are sometimes present as well. These perfumes are characterized by their freshness and lightness including the first “Eaux de Cologne”.

The one subgroup under this family is Aromatic.

Aromatic – The citrus accord is enhanced by the addition of aromatic notes, such as thyme, rosemary, tarragon or mint. Examples include: Calvin Klein CK One, Rochas Eau de Rochas, and Lancome O de Lancome.

Floral – This family is composed of a large variety of creations ranging from sumptuous bouquet arrangements to “soli flora’ compositions. Perfumers can let their creativity run wild, enriching florals with green, aldehydic, fruity or spicy hints. With its natural scent, the floral note is one of the most widely used in women’s perfumes.

Carnation – “The poet’s flower” is also found in perfumery and plays a part in the development of rich and harmonious fragrances. Examples include: Calvin Klein Eternity for Women, Nina Ricci L’Air du Temps and Lancome Miracle.

Green – Green notes can add a sharper freshness to the floral bouquet. Galbanum is a typical ingredient in this type of perfume as well as combinations that evoke freshly-cut grass. Examples include: Ralph Lauren Lauren, and Estee Lauder Beautiful.

Muguet – A floral bouquet whose keynote is lily of the valley, a timeless white flower which gives perfume a fresh note of springtime. Examples include: Cacharel Anais Anais and Estee Lauder Pleasures for Women.

Orange Tuberose – Introduced in 1948 with Fracas de Piguet, this sub-family has kept all of its appeal. It includes original scents of a unique sensuality. Examples include: Armani Code for Her and Givenchy Amarige.

Oriental – Also known as “amber” fragrances – stand out because of their unique blend of warmth and sensuality. They draw their richness from heady substances like musk, vanilla and precious woods, often associated with exotic floral and spicy scents.

Subgroups under this family are: Floral, Spicy, Vanilla and Woody.

Spicy – Spices such as cinnamon, cloves and nutmeg join the Oriental accord to enhance the originality and character of these unmistakable perfumes. Examples include: Sonia Rykiel Belle en Rykiel, Estee Lauder Youth Dew and Yves Saint Laurent Opium.

Woody – Warm and opulent notes like amber and sandalwood, or dry notes like cedar are added to the Oriental accord to further accentuate it. Examples include: Bulgari Eau Parfumee au The Rouge, Lancome Hypnose, Thierry Mugler Alien, Guerlain Samsar and Molinard Habanita.

Subgroups under this family are Aquatic, Fougere, Fresh and Rustic.

Aquatic – The compositions of this subfamily brighten up the basic aromatic accord with an ocean note. This modern family boasts many recent creations. Examples include: Armani Acqua Di Gio for Men, Davidoff Cool Water Game, Bulgari AQVA Pour Homme and Kenzo for Men.

Rustic – The dominant aromatic accord is enhanced by the addition of rustic notes carrying scents of the countryside such as new-mown hay or grass. Examples include: Aramis New West for Men, Hugo Boss Hugo, Ralph Lauren Polo Sport, Calvin Klein Escape for Men and Kenneth Cole Reaction.

Citrus – This family includes all perfumes mainly composed of citrus notes such as bergamot, lemon, orange, tangerine and grapefruit. These fragrances are characterized by their freshness and lightness. The first Eaux de Cologne belong to this category. The masculine character comes from the frequently strong presence of aromatic and spicy notes.

The one subgroup under this family is Aromatic.

Aromatic – The hesperidium accord is enhanced by the addition of aromatic notes, such as thyme, rosemary or tarragon. Examples include: Armani Pour Homme, Dior Eau Sauvage, and Azzaro Chrome.

Subgroups under this family are Fougere, Spicy and Woody.

Woody – These perfumes with their woody middle note, are warm and opulent when based on sandalwood or patchouli,. Cedar and vetiver make them dryer. These warn, dry and elegant masculine accords often contain a dash of citrus or aromatic notes.

Subgroups under this family are Aquatic, Aromatic, Chypre, Floral Musk and Spicy.

Aquatic – This composition if often harmonized with an aromatic woody accord, and ocean notes complement its structure. Examples include: Aramis Always for Him, Issey Miyake L’Eau d’Issey for Men, Donna Karan Red Delicious Men.

Chypre – The addition of chypre notes such as oakmoss and labdanum ciste enhances the predominant woody accord. Examples include: Aramis and Ralph Lauren Polo.